Talk about an Only in America success story, one has to look no further than–of all things–a guy who dons a chicken suit for fun and notoriety.

The Famous Chicken, also known commonly as The San Diego Chicken, has reached icon status as a sports and entertainment personality throughout the nation and the world. In his element as an outrageous comic actor, he’s as unique and gifted a humorist as any stage has ever seen.

Perhaps in another era, the role of The Chicken could’ve been played by Harpo Marx, Peter Sellers, Andy Kaufman or other physical comedians. Still, there’d be debate if even those comic greats could’ve pulled off the live performances in a real world setting that Ted Giannoulas crafts every night he covers himself in costume. 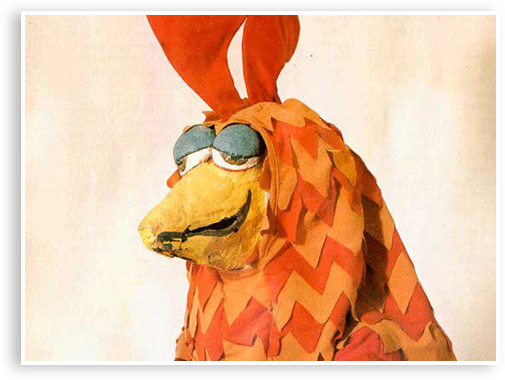 Unlike Hollywood or Broadway, Ted’s Chicken comedy sports shows are high risk improvisations during actual games among a supporting cast of non-actors, with no script, no rehearsal and no second takes. And all of this takes place before an audience of thousands, plus live broadcasts. No safe and cozy studio for Giannoulas. His sketches draw on slapstick, parody, and visual antics, all woven throughout interludes of ballgames, much to the surprised delight of sports fans.

For an athletic industry in a rising tide of bluster, attitude, arrogance and human chemical alterations, here is Ted Giannoulas and his comic musings in a chicken suit–perhaps the last voice left–to remind us that, indeed, it is just a game after all.

His impact is such that The Sporting News editors named him as one of The Top 100 Most Powerful People in Sports of the 20th Century. He’s on a list that includes Muhammad Ali, Babe Ruth, Jesse Owens, Pete Rozelle, Ted Turner and Wayne Gretzky among others.

The Chicken character has transcended into a virtual folk hero who, as one Washington newspaper editorialized, “wonderfully fills a jester’s role, mocking both substance and ceremonious forms, parodying the powerful and cavorting with utter irreverence.”

Ted is the new vaudevillian and his appeal has spawned a mascot cottage industry, for better or worse. Costumed creatures now abound in sports, business, schools and charities. In fact these days the Olympics and World Cup events even hold ceremonies to unveil their new characters. Yet, in the time of BC–Before Chicken–there were none.

Giannoulas’ debut came with no grand plan, no Madison Avenue input, no coaching and no expectations. It was only about a college kid who needed a job. Meanwhile, the radio station merely needed a student looking for work. They found each other by fate the day before spring break in March, 1974. On the campus of San Diego State, a representative from a rock ‘n roll radio station arrived to find anyone who’d agree to wear a rented chicken suit for a promotional gimmick. It was just a one week, temporary job offering to visit the local zoo and giveaway candy Easter eggs. The pay was $2 an hour. 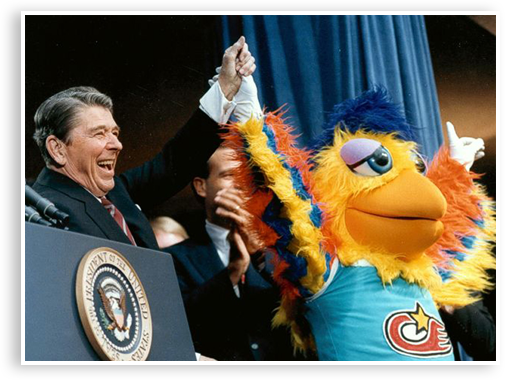 The rep, from KGB radio, descended from a hallway upon a small group of students to mention what he was looking for. “Anybody want to do it?” he asked. By happenstance, Giannoulas was there and shrugged, “Yeah, sure.” Ted was hired on the spot with a handshake. There was no audition, no interview and no job application. “Just show up,” he was told.

After his stint at the zoo was completed, Giannoulas saw an opportunity and volunteered to attend Padre games in costume as the station’s furry ambassador–an unheard of idea at the time. For Ted, it was just his hopeful plan to get into a ballgame for free. And just like that, sports entertainment marketing was introduced to the fan. Ironically, KGB could’ve auditioned the entire town and still not have discovered that inherent combination of special traits Giannoulas brings.

He is unprecedented in his work ethic that goes with a miraculous tolerance for a heat stress environment. His impromptu comedic act underscores a knowledge of the game. His act has earned him some heady reviews. In the San Diego Union, the late and legendary sports editor Jack Murphy wrote, “The Chicken has the soul of a poet. He is an embryonic Charles Chaplin in chicken feathers.”

The Sporting News said, “In show biz, they call his kind ‘Show Stoppers.’ In baseball, The Chicken is a game stopper. They might even consider him for stopping wars.”

The Seattle Post-Intelligencer stated, “The Chicken is the brightest and one of the most ingenious entertainers ever to grace the sports scene.

Time Magazine offered, “More than anything else, baseball should learn to peddle the real nostalgia–Jackie Robinson breaking the color barrier, Lou Gehrig’s farewell speech and the first appearance of the San Diego Chicken.”
Rolling Stone magazine simply headlined him “The Legend,” while others have named him, “the Sir Lawrence Olivier of mascots.”

Giannoulas parlayed his one week gig into a five year run with KGB, in the process making it the most storied promotion in radio history.

As a performer at large, his goofy doings included over-the-top station giveaways with tons of watermelon delivered to beach sites in refrigerated trucks, concert tickets handed out on the streets and albums passed out in the parks, among other promotional adventures. His tenure featured two generations of costumes. The first, a rental from a defunct, local shop was a horrid, rag tag thing, adorned with paper maché head and a heavily padded body of red cloth zig zags to emulate feathers. Novelty amusement aside, the contraption was known to spook children.

Later, however, a different styled outfit was made which proved to be the catalyst for the character. It was lighter and brighter, enabling Ted to become nimble and animated among the crowds like never before. The Chicken seemed like a cartoon come to life.

Not only did he bring this new found energy to sporting events, he also carried on crazily at rock concerts. He was even invited to make spontaneous appearances on stage with marquee rock acts of the 70s and 80s. He jammed in the spotlight with Jimmy Buffett, Paul McCartney, Sammy Hagar, J. Geils Band, George Thorogood, The Ramones, Doobie Brothers, Cheap Trick, Chuck Berry, Jerry Lee Lewis and dozens more.

Most notably, one night in 1976 at an Elvis Presley concert, The Chicken’s dancing escapades in the aisles of the San Diego Sports Arena actually stopped The King in mid song, doubled over in hysteria!

After composing himself, the surprised Elvis joked aloud to his sold out audience if his manager, The Colonel, could make use of The Chicken. Eventually, as the years progressed, Giannoulas’ growing career ambitions conflicted with the station management’s policies.

A much ballyhooed impasse ensued. With major news attention focused on the situation, KGB unceremoniously fired the fowl in May, 1979 and went to court to block Giannoulas’ right to work in a chicken costume. But the California Supreme Court instead went on to rule in Ted’s favor and declare him to be a free as a bird of any ex-employer obligations. 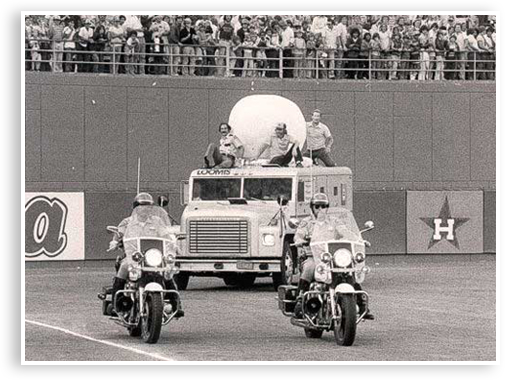 June 1979 brought a new beginning. The Chicken returned big time. It was a glorious and elaborate entrance in a 10 foot Styrofoam egg, complete with Highway Patrol motorcade escort, atop an armored truck before a Padre game.

Upon being lowered onto the field by the players themselves, with the blaring music of the 2001 theme, The Chicken crashed out of the egg to a standing ovation of 47,000 people. “The Grand Hatching” not only symbolized a clean break with the past with Ted debuting his new outfit (the one he still wears to this day), but the event itself has been cited by baseball historians as one of the greatest public relations spectacles in the game’s history. 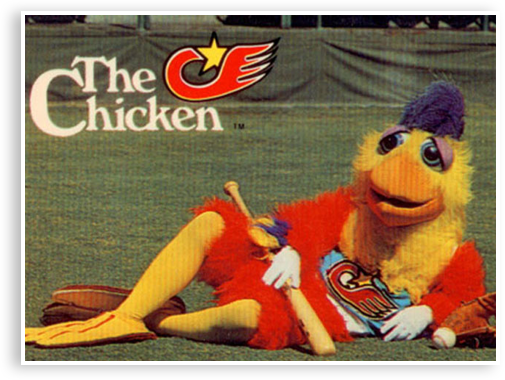 Giannoulas has since accommodated amazing invitations to perform near and far. He has visited eight countries, four continents and all fifty states.

Moreover, he has played to more than sixty million people in live attendances–a feat which ranks with the likes of the Rolling Stones, the Grateful Dead, Willie Nelson and the late Bob Hope. And like Bob Hope, The Chicken has even been summoned in the company of United States Presidents.

In May 2001, The Chicken was asked by President Bush to perform at the celebrated, first T-ball game at the White House, broadcasted live on C-Span by Bob Costas. In addition, years earlier, both President Reagan and President Ford had The Chicken help introduce them at public events from the podium.

It’s not a bad calling for Giannoulas, a former student dishwasher and immigrant from London, Ontario, Canada. Yet under those feathers, he has single handedly introduced new concepts, ideas and formats in helping to present a game as entertainment.

For example, as well as being recognized as the first professional sports mascot, he pioneered the idea of using popular recorded music at games. Before The Chicken came onto the scene, all professional games only featured live organ music. Today, soundtracks which are featured as so-called “stadium rock”, have their roots from the act in the 70s. In addition, Ted was the first indaring to use a game’s time out breaks to take to the field or court and play his comedy gags for the waiting audience.

Yet, the most extraordinary of Giannoulas’ achievements may not be that well noted on the national radar screen and understood only to those who have attended his live performances. After every game, The Chicken will sit and sign absolutely every autograph request at no charge. No one is ever turned away, often averaging 90 minutes.

His autograph lines are longer than the wait for any ride at Disneyland. The Chicken’s most extreme stay was after a Texas Rangers’ game when the line went until 2:20 in the morning in 90 degree heat. It’s estimated that Ted has signed his signature more than two million times for sports fans.

That’s exhibit A in a salute to the unique act of The Chicken. The San Diego Union once said, “It’s nice to know that in a world buffeted by inflation and nuclear accidents, we can still laugh at the ridiculous and appreciate the sublime–which is the state Ted Giannoulas sometimes approaches with his comic act.” 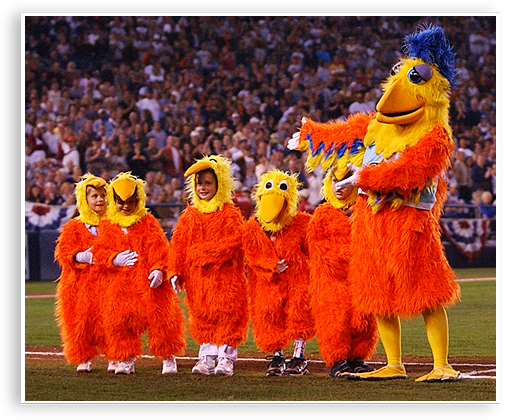 The Chicken is the jester among the jerseys. He is what everyone wants him to be, prancing in a spiritual space on a creative odyssey. Or to put it simply, he plays the class clown for all those who wish they never grew up. 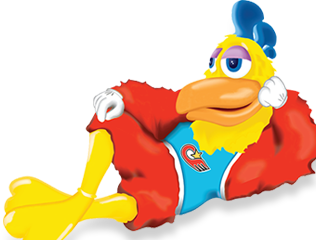